If neglected, vacant properties can quickly fall into disrepair. Our infographic outlines some of the key actions you can take to protect your property.

If neglected, vacant properties can quickly fall into disrepair and may become a target for arson, theft, vandalism, squatting, and possibly even urban exploring if the building has any unusual or interesting characteristics
Property owners have a legal responsibility to keep empty premises safe and to maintain the validity of their insurance cover for the building(s).

The biggest risks to vacant properties

Empty properties by their very nature are more vulnerable than occupied ones and the impact of any problems arising, such as a leaking roof, tend to have a greater impact as they can go unnoticed for longer periods.

Arson is a common and growing cause of received claims by insurance companies.  Premises that are obviously empty to the casual observer are much more susceptible to an attack than properties which are occupied.

Metal theft remains a big problem, with copper wiring, lead roofs, garden ornaments and other metals being targeted by thieves. With the prices of some metals on the rise, including copper, the chances of an unoccupied property being attacked to steal copper cabling, metal roof coverings etc. remains high. Just recently, an old public house was left temporarily vacant whilst it was being sold. Three men wearing high-visibility jackets turned up one day with a lorry and ladders, and proceeded to calmly strip the roof of its lead, unchallenged in broad daylight.
Older buildings often have architectural items inside them that are also targeted by thieves, such as fireplaces. Even centuries-old flagstones and statues in the grounds of a property have been stolen, and sold for a small return as scrap in comparison to their true replacement value.

Urban explorers, or ‘urbex’, are a group of people, who like to explore closed, empty or derelict buildings, like churches, old country houses, theatres and sports grounds. They don’t think of themselves as trespassing or breaking and entering, but just curious explorers. However, whilst the unspoken rule of urban exploring is "take nothing but photographs, leave nothing but footprints", with its rising popularity not everyone may stick with these principles.

If an unauthorised trespasser to a vacant property injures themselves and the cause of their injury is found to be the result of the property owner’s negligence, the owner can be liable for damages. A hole in the ground, such as an open manhole cover, is a risk – if someone falls in, there can be serious injury, putting the property owner at risk of prosecution and subsequent payment of damages under the Occupier’s Liability Act 1995.

So how can you protect and keep vacant properties secure?

The first line of defence against many of the risks outlined above is to secure the premises well, to prevent unauthorised entry. Assess the risks – the detailed eye of a professional risk-assessor is recommended – and then implement the best-fit solution or combination of options.
There has been a leap in technological solutions to managing the risks described above, that not only improve the security and protection of empty premises, but also help to significantly cut the costs compared to more traditional methods, such as security guards. There are highly effective monitored intruder, flood, CCTV, scaffold and fire alarms that can operate without external power supplies. Systems are flexible and they can be moved easily to maintain the best fit in an unusual or challenging environment, such as a building undergoing refurbishment. Some wireless versions are designed specifically as temporary installations. These systems can link to 24-hour monitoring services to ensure someone is alerted of any incident, minimising the risk of property damage as a consequence.
In addition to alarms, to reduce the risk of arson, combustible items and waste should be removed, both inside and outside the premises, otherwise they can be used by vandals to start a fire. 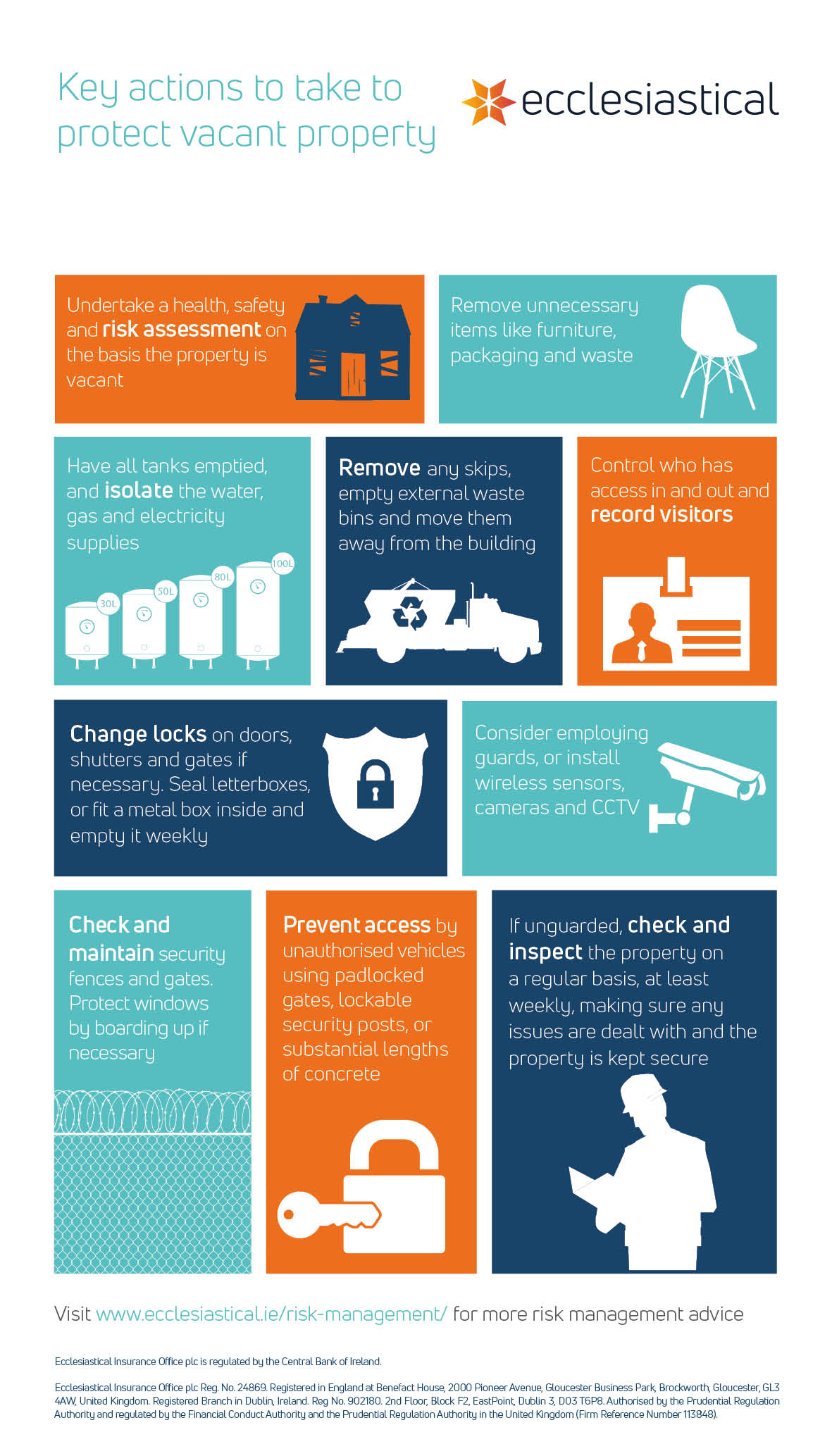